Basic reproduction rate as indicator for the spread of COVID-19 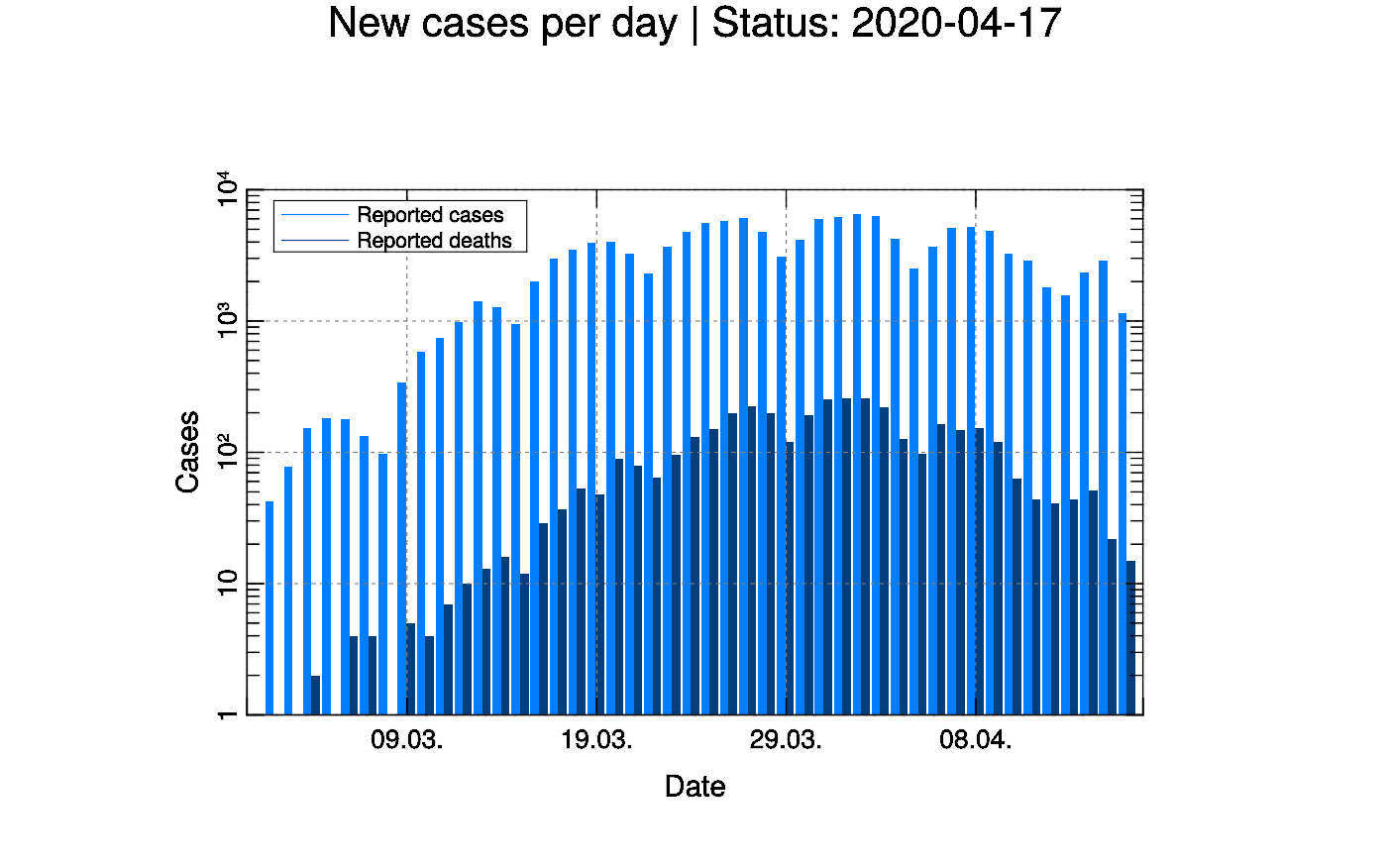 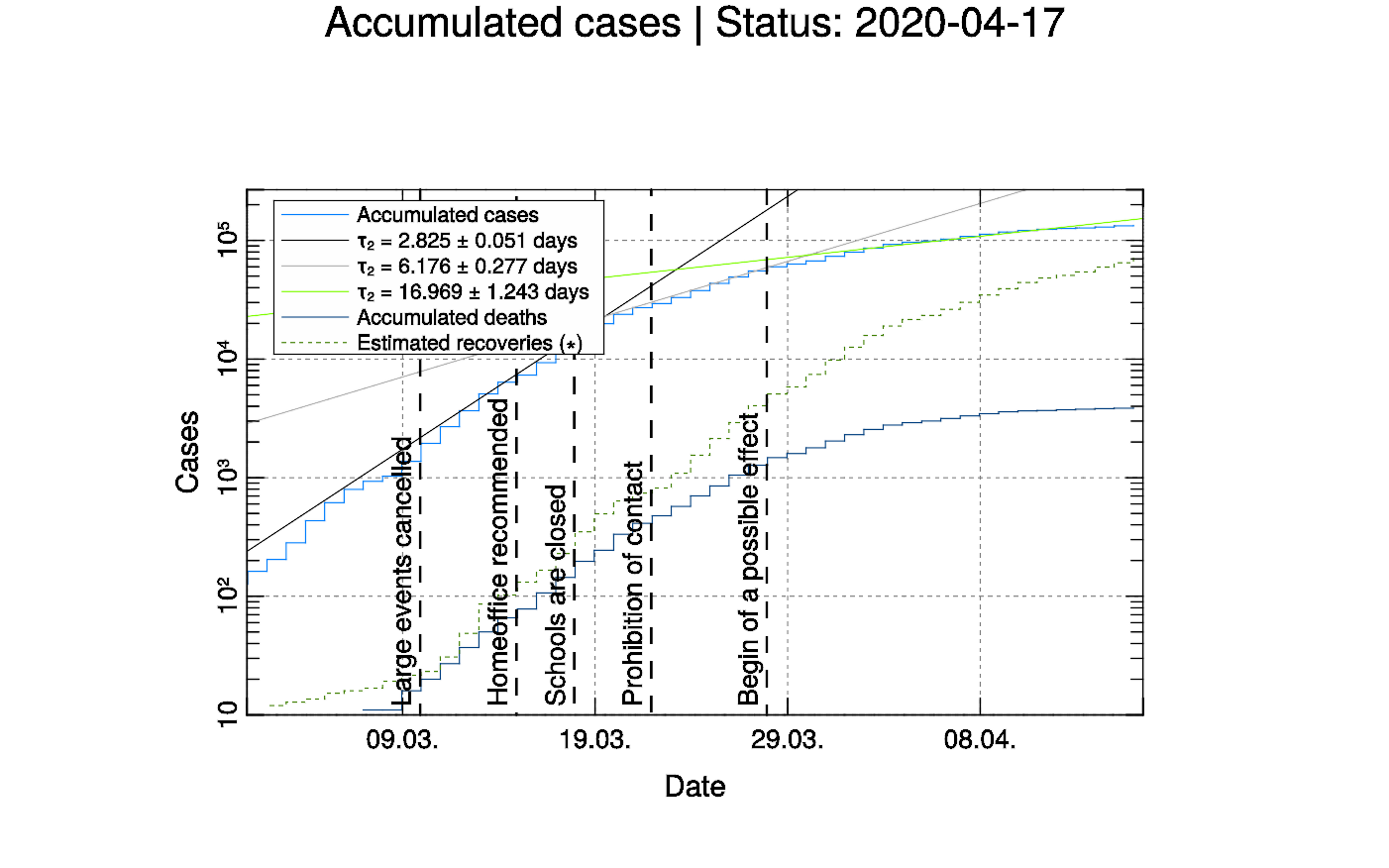 Figure 2: (Logarithmic scale) Accumulated COVID-19 cases and deaths displayed vs. the reporting date. The green, grey and black curves are the best fits for the exponential growth. Note that the doubling time of the green curve is 3 days larger than the grey one, which is again 3 days larger than the black curve. We also added the major government actions [4], which influence the behavior of the curve. Additionally, we show an estimation on the number of recoveries.
(*) The estimation is based upon the WHO report on the Hubei case [1], which gives us rough numbers on the recovery time. 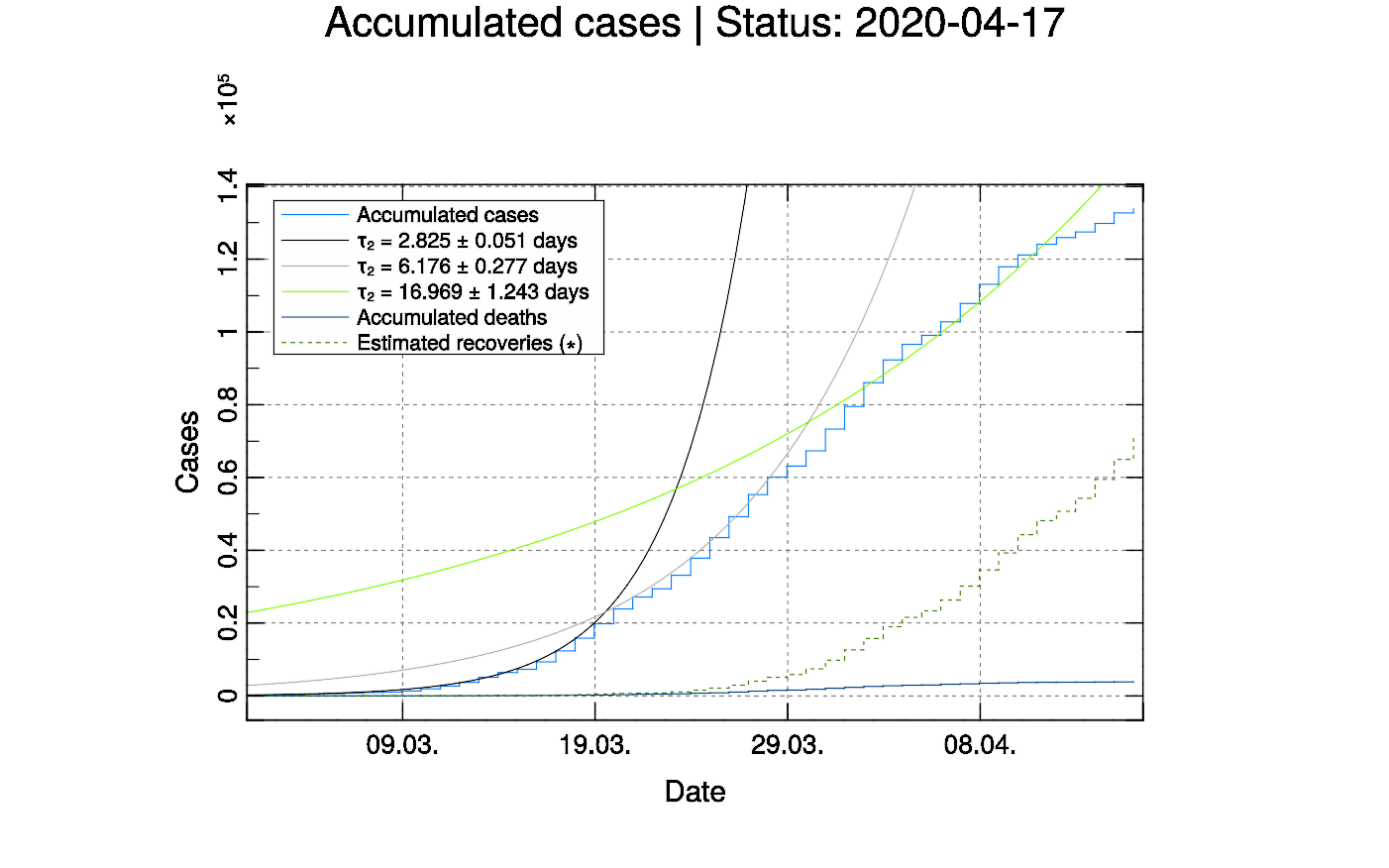 Figure 3: (Linear scale) Accumulated COVID-19 cases and deaths using a linear scale for comparison. Note that the number of deaths is small compared to the number of infections. Additionally, we show an estimation on the number of recoveries.
(*) The estimation is based upon the WHO report on the Hubei case [1], which gives us rough numbers on the recovery time.

The doubling time has increased to τ2 = 16.969 days (β = 0.041 days-1) at the transition from the grey to the green curve, which means that it takes nearly 17 days for the number of reported infections to double, which is far more than the target doubling time. This time is required from the government and the Robert Koch Institute  and shall be about 13-14 days. For the reasons see the model calculations below.

The SIR takes into account the persons removed from the system (by immunity or death). In figure 4 the model with the three doubling times from figure 2 was calculated. You can see the susceptible (grey), infected (blue) and already immune persons (green) for the three scenarios. Note that the current doubling time is already higher than the target, so the third and thickest curves are already fairly flat and difficult to see. 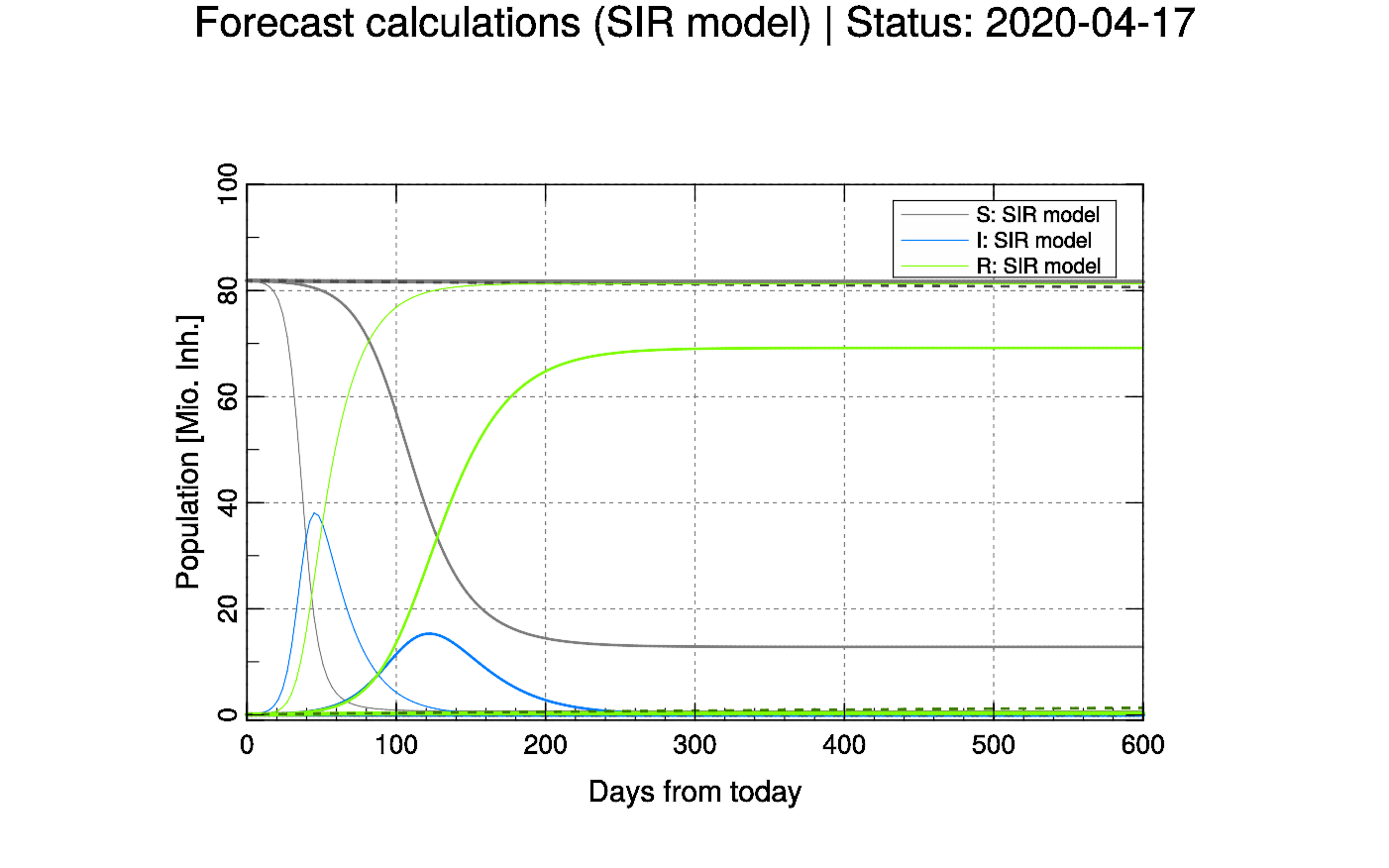 Interesting results of this model are that for each scenario there is a maximum in the curve of infected persons. In addition, this model shows how high the target immunity of the society (in this idealized case) will be. For example, if the disease spreads rapidly, an immunity of almost 100% is achieved, whereas at the current rate of spread we can probably expect an immunity of less than 1% of the population. As a consequence, the current situation will most likely repeat itself with a new wave of COVID-19, if no vaccine is available by then. Flattening the infection curve therefore has its price: we gain time for research but have to live longer with the current restrictions. If we look at the current doubling time of about 15 days, we can expect the maximum number of infectious of about 55,000 patients today.

The basic reproduction number as indicator for the spread

If the value 0.99 is used for the basic reproduction rate in the model equations, the dashed lines in figure 5 are obtained. As can be guessed, neither the infections nor the removed (immune) persons increase. If the numerical values are examined, a similar picture emerges here: the number of infections decreases over time (albeit very slowly), while the immunities slowly increase. After 600 days 31,000 infected persons and 140,000 immune persons remain. 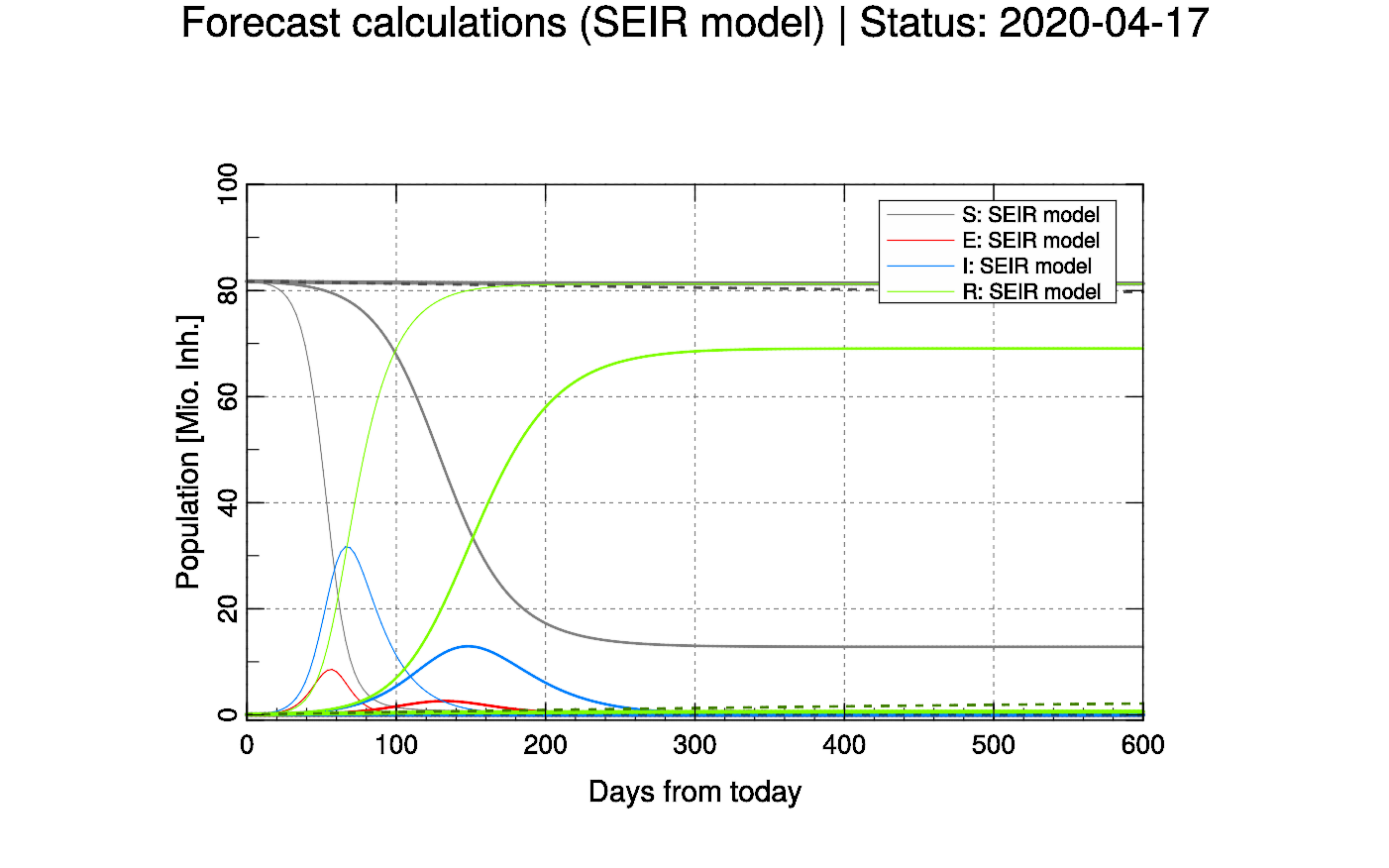 Figure 5: Forecasts of the future behavior using the SEIR model [13] (susceptible-exposed-infected-removed model) with the findings from the current data. The different linesizes represent the three doubling times from figure 2 (thin to thick), the dashed lines represent the target behavior with a base reproduction number of 0.99. This model considers a disease, where an infected person is not infectious immediately.

The SEIR model considers the delay in infectiousness

The SEIR model takes into account the case where an infected individual is not immediately infectious and thus, despite being infected, cannot immediately infect other people. It is therefore closer to reality than the SIR model. Using the calculated parameters in this model, one obtains the graph of figure 5 with the susceptible (grey), the exposed (red), the infectious (blue) and the remote (green) persons. This model shows a very similar course to the SIR model. The central difference is the progression of the infectious persons, which in this model are automatically flattened out somewhat by considering the temporal shift. Another difference between these models is that the planned infestation (see the dashed lines) of the society is marginally higher. In this case, after 600 days about 8,000 exposed, 46,000 infectious and 224,000 immune persons remain. Using the current numbers, we may expect the maximum number of 89,200 infectious persons in about 12 days, however, this estimation is strongly dependent on the (unknown therefore guessed) number of exposed people.

The growth rate of COVID-19 can be described by the basic reproduction rate. This rate contains the information about how many more people are infected by an infectious person on average. With a number greater than 1, the growth is exponential, with 1 it is linear, and with less than 1 the growth is inverse-exponential, i.e. exponentially decreasing.

Example of a wave of 15 generations of infected persons (15 infection cycles):