Government actions are observable in the COVID-19 data Analysis of Data Bases for COVID-19

Most actual Data Analysis is performed on Data from John Hopkins University, as here data is updated several times per day thus always providing the most actual data, which is of great importance for news to be always up-to-date.

However, we here use the publicly available data of the Robert Koch Institute. These data are updated only once a day but provide for Data Analytics one advantage: The newly reported cases are not mapped to the current day, but the date on which the doctor diagnosed the infection is used. So, the curve of newly reported cases still changes over time some days afterwards, making Data Analytics a “living document” and on the same time leaves out one blurring parameter: the time between diagnosis at the doctor and appearance in reports of each state that differ often by several days (reporting delay, details can be found in the dashboard of the Robert Koch Institute).

Since the number of subsequently reported cases is decreasing asymptotically, analyses about the situation some days ago can be carried out with a higher quality and allow conclusions to be drawn, however less quickly.

Impacts of the data source

This is a good example that the goals for data analysis have an impact on the choice for available data source: Being always up-to-date as quick as possible (JHU data base) vs. Higher homogeneity of data base for profounder but less actual data analysis (RKI data base). So always chose your data source according to your use cases.

Behavior of reported cases over time

Figures 1 and 2 show logarithmic visualisations of the daily reported and the accumulated COVID-19 cases displayed versus the reporting date. Figure 1 shows the reported COVID-19 cases and deaths against the reporting date. From the March 19th onwards, it can be seen that the growth of newly reported cases decreases, which repeats after March 29th, which is a clear indicator for the success of the contact prohibition as we will see in the following.

An additional observation that we have been able to make is a periodic behaviour of the curve. The periodicity is 7 days with the lowest value on each Sunday. It is of course explained by opening hours of doctors, laboratories and public health departments. This limits us to the extent that we cannot make reliable statements about the last seven days, but rather have to wait for a repetition of the cycle.

Figure 2 shows the accumulated cases against their respective reporting dates. Here, too, a bending of the curve can be seen from March 19th and again from March 29th onwards. This also coincides with the three fitted exponential curves (note again the logarithmic scale, figure 3 presents the same graph using linear scale), which intersect each other on March 19th and March 28th. The doubling time has increased to 9.692 days at the transition from the grey to the green curve, which means that it takes about 10 days for the number of reported infections to double. The government wants a doubling period of far more than 10 days until the current measures can be relaxed. So we are on the right track.

The analysis of the time behavior of exponential data can be tricky because the human mind has no understanding of exponential growth. Switching to a logarithmic scale, which makes exponential curves appear linear, makes analysis much easier. If the data are also periodic, reasonable statements are only possible after at least one period has elapsed.

Taking into account the median incubation time of COVID-19 of 5-6 days (source), the kink in the growth rate on March 19th may be linked to the recommendation of Minister Jens Spahn to do his work in his home office. It is likely, however, that the data situation does not allow any statement about this, since the actual system is much more complex. Effects that have an influence on the propagation rate include

However, the kink at March 29th is clearly related to the begin of the contact prohibition at March 22nd, because the time difference is in the regime of the median incubation time. Therefore, we can confirm that the actions of the government have been successful in that they have significantly increased the doubling time. As the maximal incubation time of COVID-19 is 14 days, we expect that the curve will flatten even more over the current week.

The more complex a system is, the more difficult it becomes to distinguish between coincidence (simultaneous occurrence) and causality (logical consequence) in the data. In such cases, it is helpful to trace existing structures in the data back to logical causes rather than looking for structures from the perspective of logical causes. Otherwise you will probably fool yourself.

Martin Eichner, epidemiologist from Tübingen and co-responsible for the online COVID 19 simulation, was interviewed by Tagesschau.de (Interview in German). The core statement is that the current contact ban does not solve the problem in any way, but only postpones it into the future, as the central problem of missing immunity remains. The goal of the contact ban cannot be to completely survive COVID-19, but only to delay the spread of the disease until a vaccine is available. However, as this is expected to take until the end of the year, the contact ban (if continued until then) will cause considerable social, economic and financial damage, which may not be in proportion to the benefits of contact ban (the number of deaths may not necessarily be lower). Eichner recommends propagation in waves, i.e. one takes the health system to its limits and then restricts public life incomparably harshly until the situation calms down again. This is repeated until the infestation of the population has reached 70%. But even this will be a huge burden on society.

The curve's integral does not change

This suggests that Hamburg, Baden-Württemberg, Bavaria and Saarland are particularly affected by COVID-19 and have a higher rate of spread than the other German states.

Contributions of the Ischgl case

Absolute numbers are rarely helpful, so it is useful to compare results with literature values or other systems. However, it is necessary that the systems to be compared differ as little as possible or in a controlled way. Unfortunately, this is not the case for the federal states, as their populations, population densities and distributions, and how they deal with the spread of COVID-19 are very different. The use of population density as a base value increases the comparability somewhat, but cannot completely establish it. 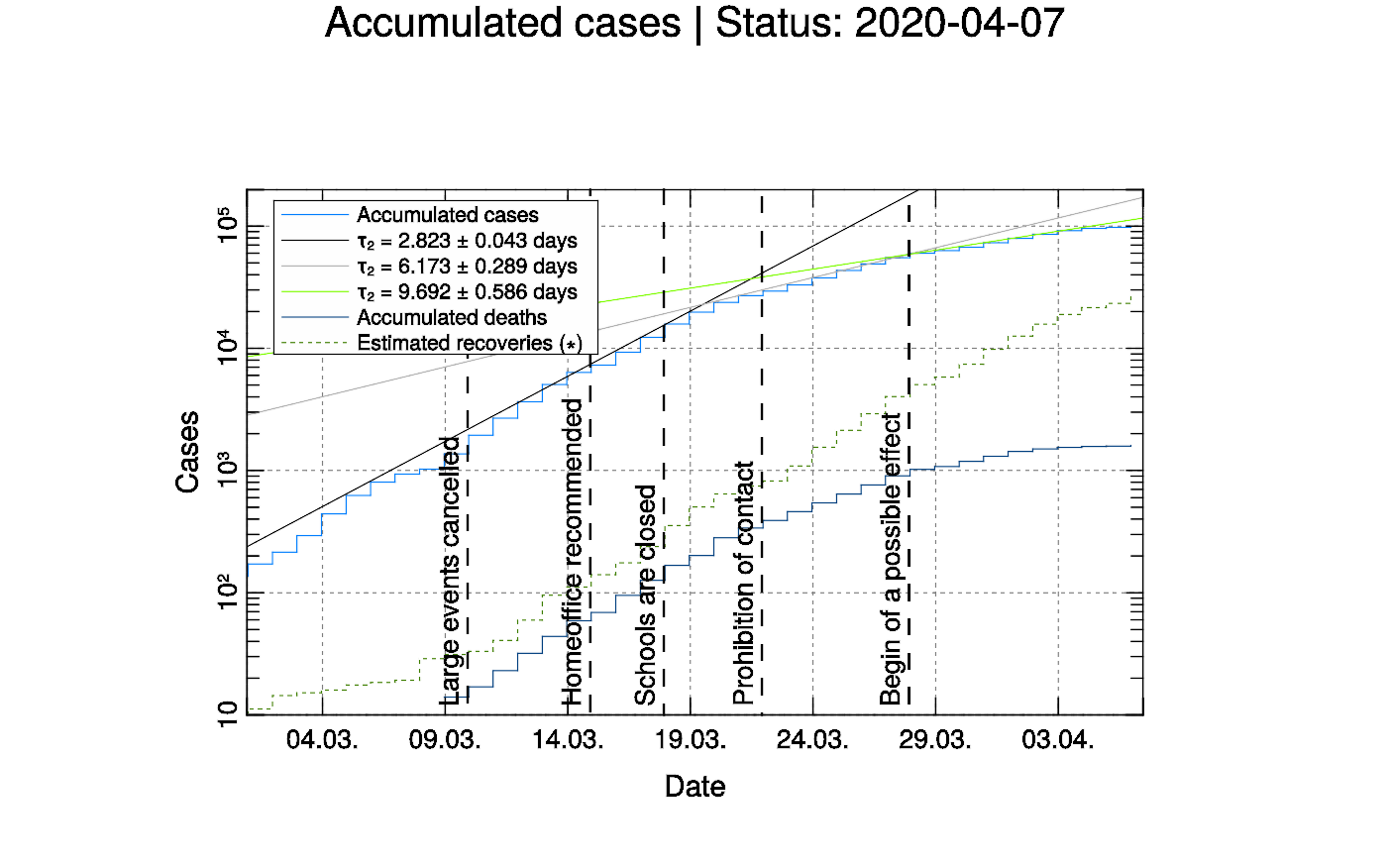 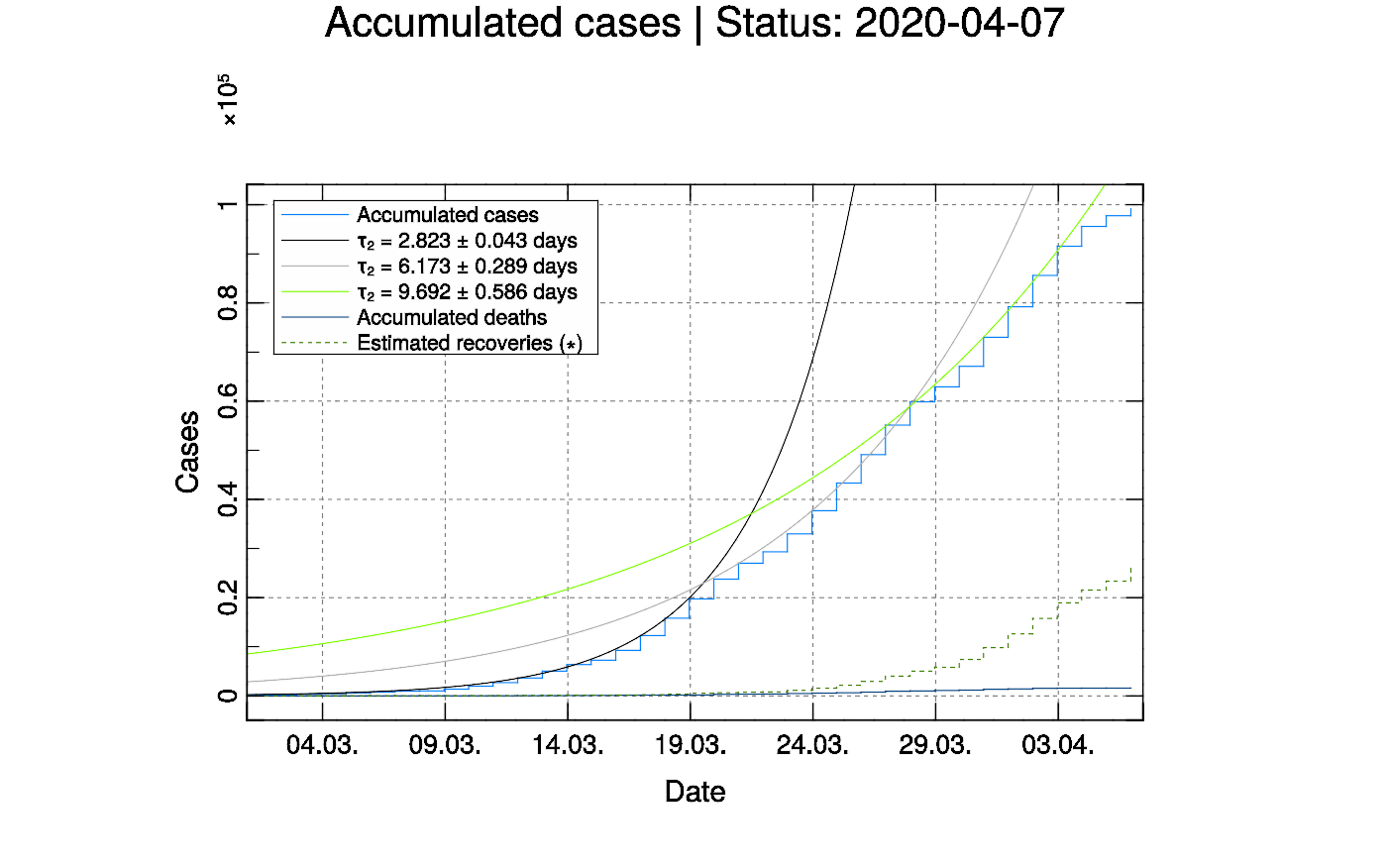 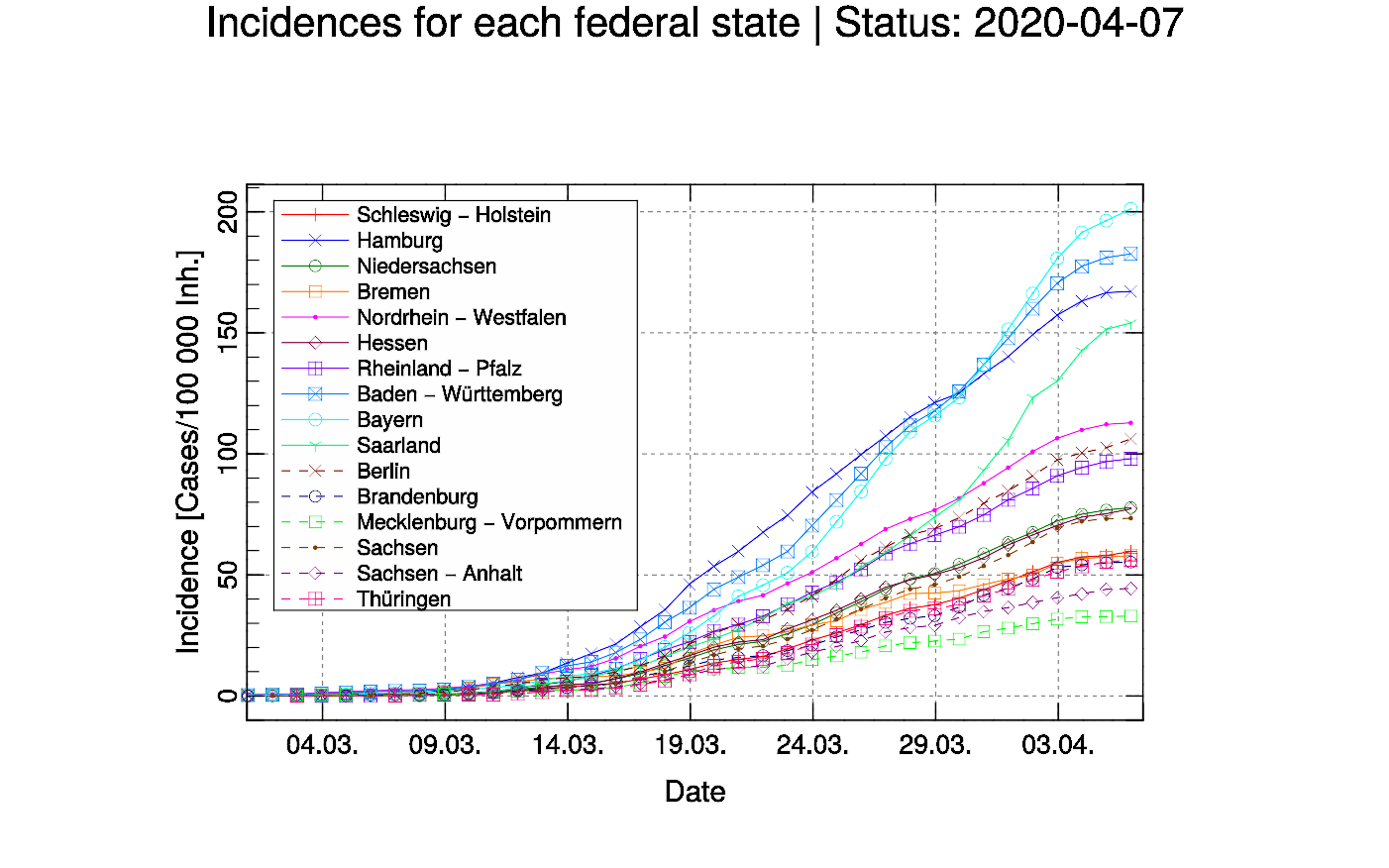