The first analyses we have made are shown in Figures 1 and 2. Figure 1 shows the reported COVID-19 cases and deaths against the reporting date (note the logarithmic scale). From the 19th of March onwards, it can be seen that the growth of newly reported cases decreases. This can be taken as an indication that the measures decided and implemented by the government have already achieved initial success. However, due to the above-mentioned reporting delay, we reserve the right to revise this statement in the future. 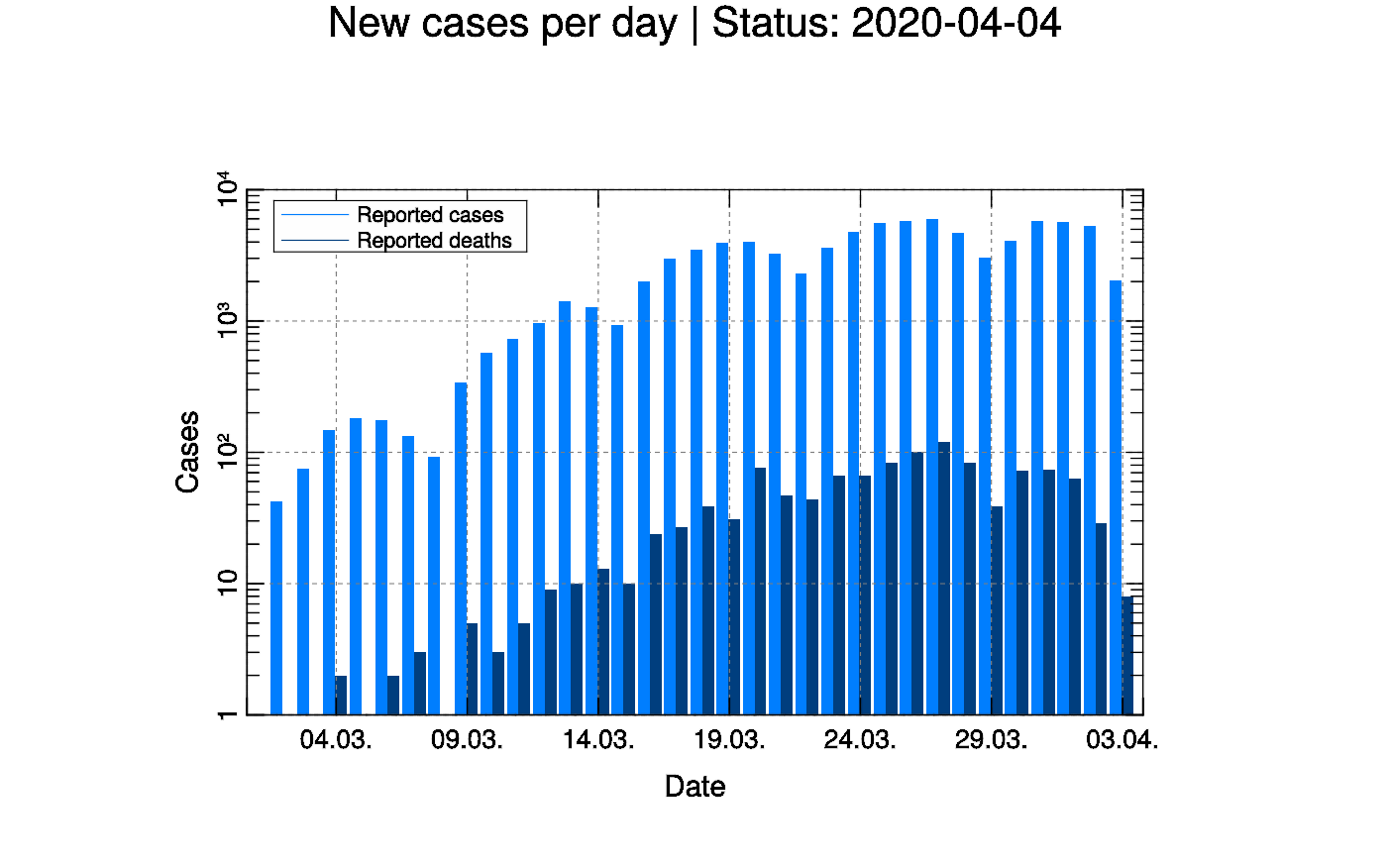 Figure 1: (Logarithmic scale) Number of new cases and new death displayed vs. the reporting date. One can see that the growth of the number of new cases per day is getting slower after the 19th of March.
Hint: the presented figures are using logarithmic scale in contrast to the official figures presented by the Robert Koch Institute. We’ve chosen logarithmic scale, because it makes exponential growth appear linear (changes are spotted more easily) and suppresses distracting small changes. Additionally, now it’s also possible to visualize the death numbers, which are two magnitudes smaller than the number of infections.

An additional observation that we have been able to make is a periodic behaviour of the curve. The periodicity is 7 days with the lowest value on each Sunday. This is of course explained by the opening hours of the family doctors.

Figure 2 shows the accumulated cases against their respective reporting dates. Here, too, a bending of the curve can be seen from the 19th of March onwards. 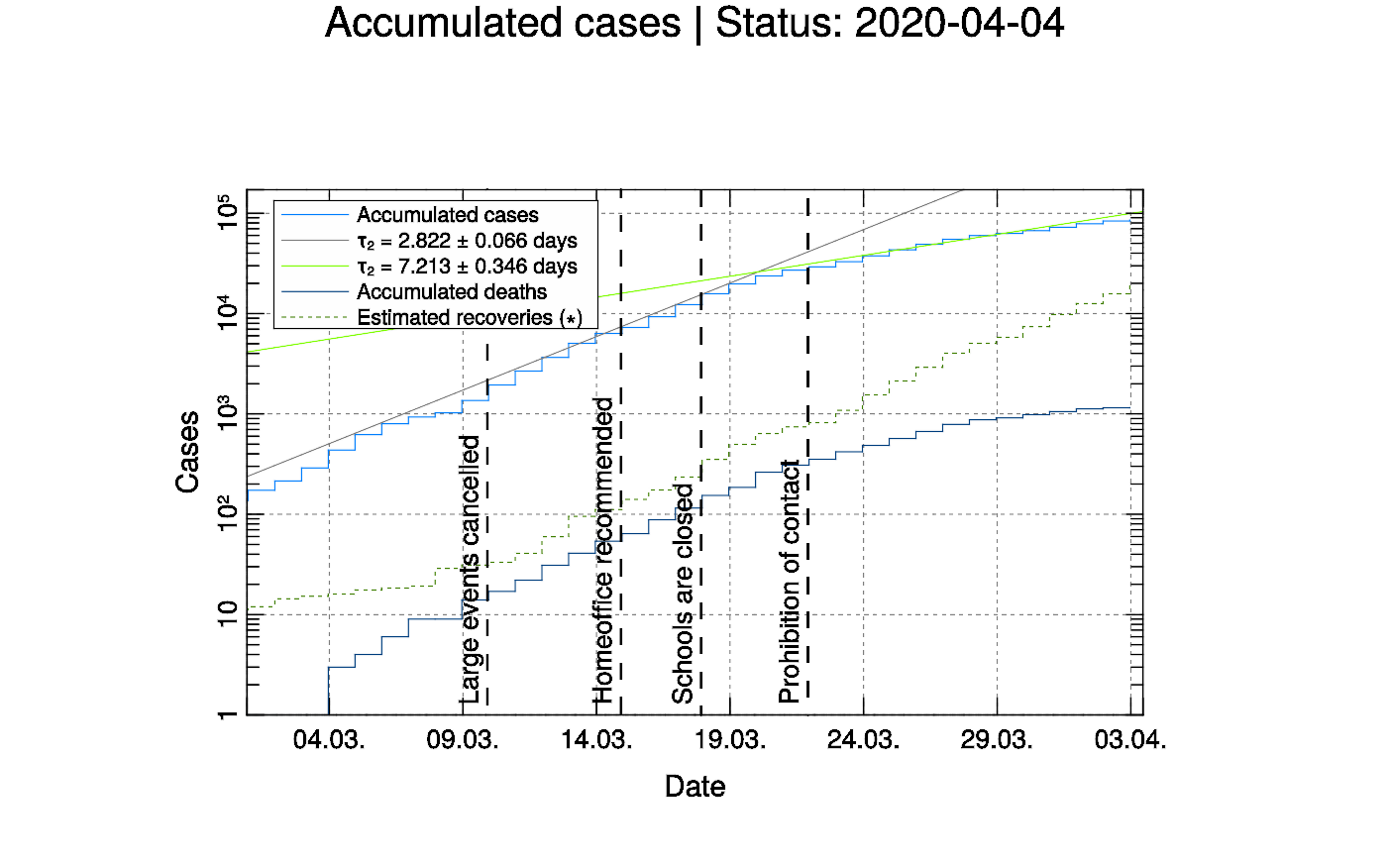 Figure 2: (Logarithmic scale) Accumulated COVID-19 cases and deaths displayed vs. the reporting date. The green and grey curve are the best fits for the exponential growth. Note that the doubling time of the green curve is more than double the grey one. We also added the major government actions [4], which could influence the behavior of the curve. Additionally, we show an estimation on the number of recoveries.
(*) The estimation is based upon the WHO report on the Hubei case [1], which gives us coarse numbers on the recovery time.

This also coincides with the two adjusted exponential curves (note again the logarithmic scale, figure 3 presents the same graph using linear scale), which intersect each other on March 19th. The doubling time has doubled to 7.213 days at the transition from the grey to the green curve, which means that it takes about 7 days for the number of reported infections to double. The government wants a doubling period of 10 days until the current measures can be relaxed. So we are on the right track. 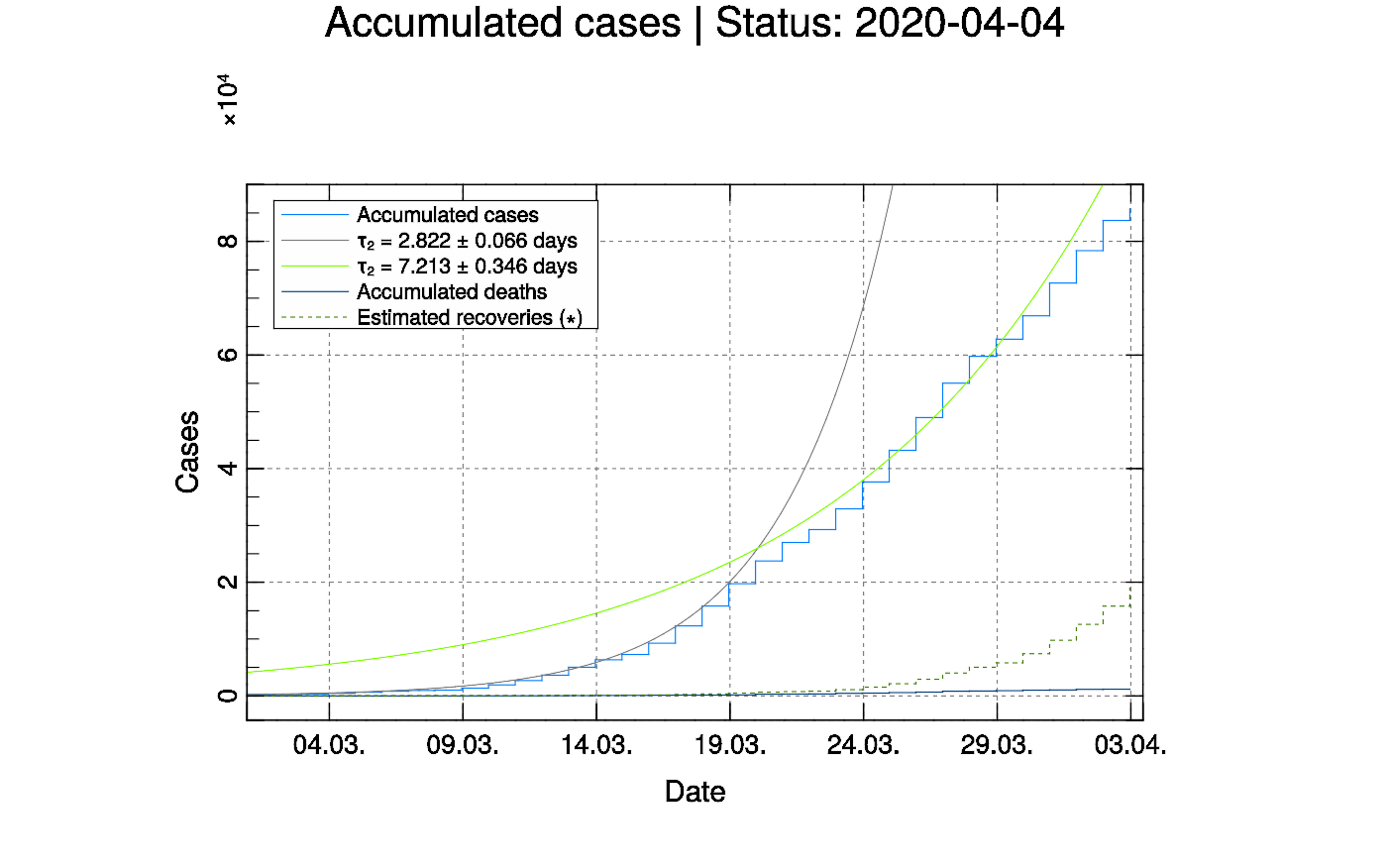 Figure 3: (Linear scale) Accumulated COVID-19 cases and deaths using a linear scale for comparison. Note that the number of deaths is small compared to the number of infections.Additionally, we show an estimation on the number of recoveries.
(*) The estimation is based upon the WHO report on the Hubei case [1], which gives us coarse numbers on the recovery time.

Due to the reporting delay and due to the periodicity of the data with the period duration of 7 days, it is not possible to make reliable statements about the current week. Even if the curves in Figure 2 for calendar week 14 seem to become flatter, this may be an effect of periodicity or statistical deviations. As soon as reliable statements are possible, we will publish them here.

Compared to the updates of the last week, starting from March 29th the growth rate has probably decreased again. However, as the data is periodic, we won’t be sure before next Tuesday, the 7th of April. If the current trend confirms, then its cause will most probably the current government actions.

Taking into account the median incubation time of COVID-19 of 5-6 days (source), the kink in the growth rate on March 19th may be linked to the recommendation of Minister Jens Spahn to do his work in his home office. It is likely, however, that the data situation does not allow any statement about this, since the actual system is much more complex. Effects that have an influence on the propagation rate include

FMartin Eichner, epidemiologist from Tübingen and co-responsible for the online COVID 19 simulation, was interviewed by Tagesschau.de (Interview in German). The core statement is that the current contact ban does not solve the problem in any way, but only postpones it into the future, as the central problem of missing immunity remains. The goal of the contact ban cannot be to completely survive COVID-19, but only to delay the spread of the disease until a vaccine is available. However, as this is expected to take until the end of the year, the contact ban (if continued until then) will cause considerable social, economic and financial damage, which may not be in proportion to the benefits of contact ban (the number of deaths may not necessarily be lower). Eichner recommends propagation in waves, i.e. one takes the health system to its limits and then restricts public life incomparably harshly until the situation calms down again. This is repeated until the infestation of the population has reached 70%. But even this will be a huge burden on society.

To make the case numbers of the federal states comparable, the so-called incidence is used. The incidence represents the number of cases per 100,000 inhabitants (see Figure 4). 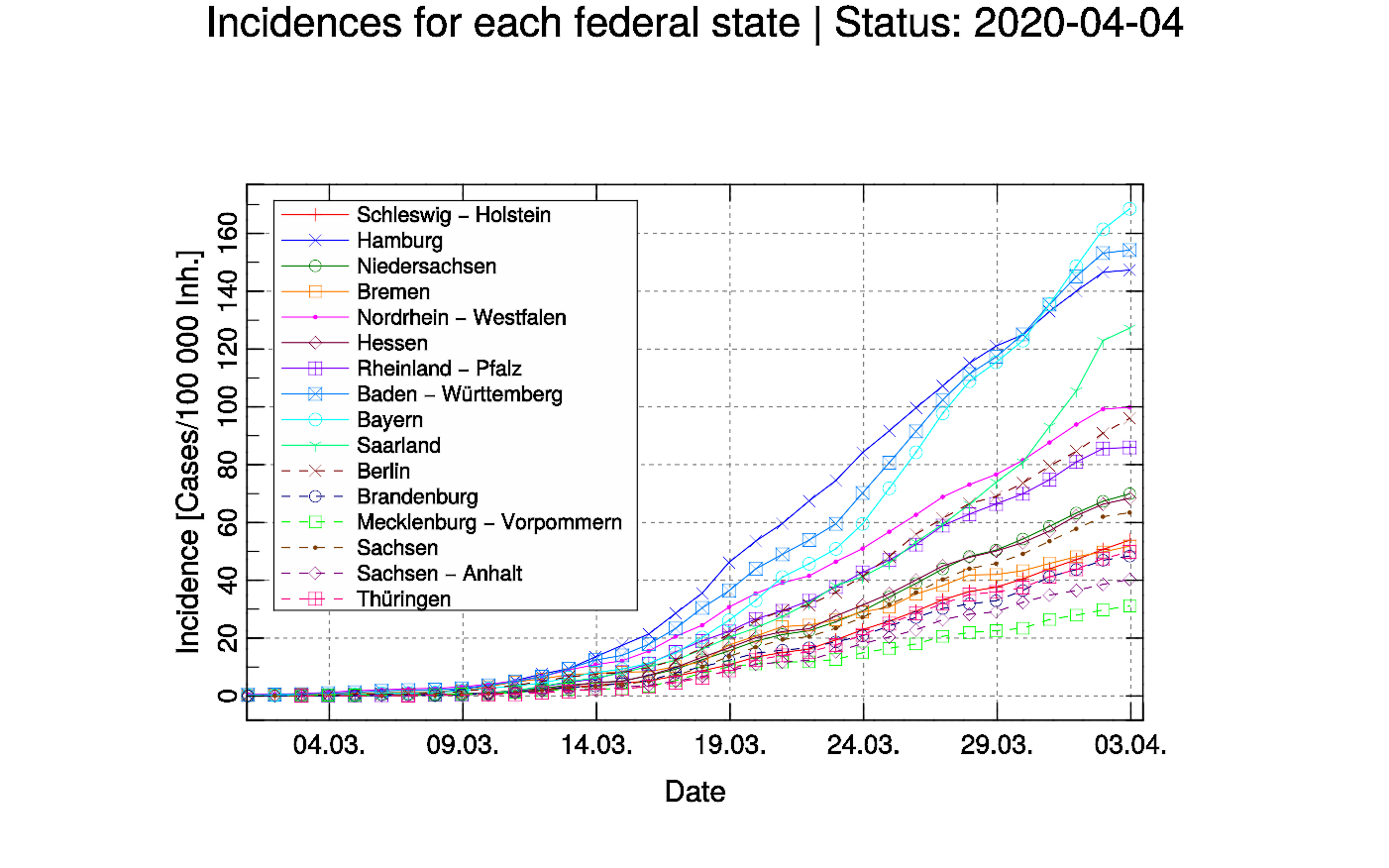 The population figures of the Länder (in 100,000 inhabitants) are shown in Table 1, middle column. Looking at the incidences of the individual federal states, three main groups emerge over time:

This suggests that Hamburg, Baden-Württemberg and Bavaria are particularly affected by COVID-19 and have a higher rate of spread than the other German states. 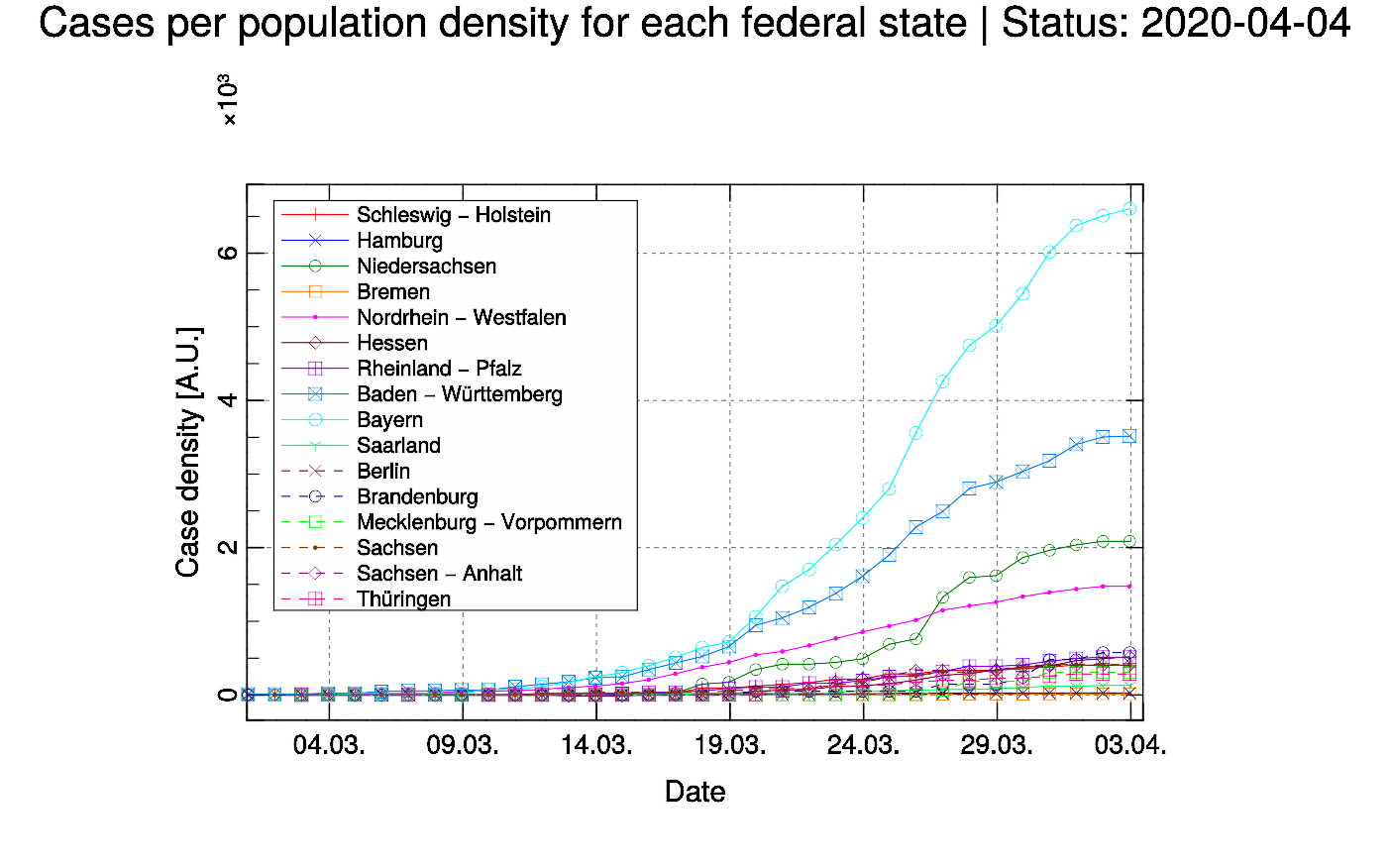